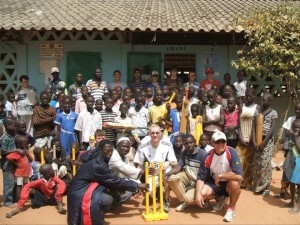 After much fundraising, generous donations from the community and a six-hour flight, we finally touched down in the Gambia. The first thing that hit us was the immense heat and the sudden realisation that we should take our hoodies off. Then, as everyone in Gambia runs an hour late, we waited in the African heat for our bus, which took us to our one night stop in the dunes hotel.
On Tuesday we had our initial introduction to the capital of Gambia, Banjul. One of the most striking things in the city was the amount of incomplete buildings. Bax, a Fresh Start Foundation representative and soon to be friend of ours told us that the buildings were often left by owners to be finished at later dates, due to insufficient funds. We then began a one off day of relaxation by the pool. A scorching day filled with water polo in the hotel pool, playing in the sea and having fun playing beach football and cricket with the extremely friendly locals. The next day the real work would begin.
The day started with a final breakfast at the hotel. Then we strapped into the magic tour bus, as we called it and began our 4 hour drive to Kwinella. Along the way we encountered local children who smiled and waved as the bus went by, street vendors trying to sell us fruit through the windows and a small, quaint service station, where we got out of the bus and really felt just how hot the tarmac roads were. After about 3 hours of driving these tarmac roads, the off road section of our journey began. Our last bumpy hour took us through a number of checkpoints and small villages, into the heart of the lower river region and Kwinella. We were welcomed into the village by a choir of voices singing, “Welcome, welcome, welcome”. We were then treated to an audience with the village elders and a young traditional dancer. Later we checked into our admittedly basic rooms that really made us appreciate our homes and their luxuries, which we seemingly take for granted.
Day three on our Gambian experience and it was time to play some cricket. This was of course after our tour of the entire school, which the Fresh Start Foundation had helped rebuild over the years. We noticed how basic the entire school and really started to empathise with them and notice all the differences in the school. Also on that day we started to teach the kids cricket. They picked the sport up extremely well, mainly because of there current understanding of rounders. The children’s clothes and footwear were mainly in tatters and we struggled to understand how they did so well at cricket while playing in broken sandals or flip-flops. This made us feel quite sorry for them but also made us admire how well they tended to cope with their situations.
While at the school we were constantly bombarded with the same question from the kids, “any bottles? Can I have a bottle please?” This was surprising for us and showed us just how much they valued something that we throw away everyday. This made us not want to waste some of the things that we usually take for granted.
The next day was one of the best, we were buddied up with one of the children we were coaching and went to spend the afternoon with there families. This was one of the most enlightening experiences of out lives. It showed us just how basically these people lived: sleeping on the floor, drinking dirty water and relying on there livestock and gardens for food and income but what I think surprised us most was there elation with the way they lived. They were happy and content with the standard of their lives and had a real sense of community and fellowship.
For the next few days we followed up on the cricket sessions and the kids showed us just how talented they were. We enjoyed a friendly football match with the school team and won 4-3. They showed there extreme sportsmanship, and were all extremely good at seemingly all sports.
After making the long journey back to Banjul we played there cricket team and also won, though I think we’ll all admit it was down to Usman and Luke. The Gambian kids again showed extreme sportsmanship and were not fazed by the outcome of the match, which makes us wonder if perhaps some teams back in England could learn from them.
A final day of relaxation and fun on the beach proved to be a great experience. Then a look round the local crafts market where we haggled on the price of gifts to take home, which was very fun with the laid back Gambians. Then it was time to go home. We all had learnt a lot from our experiences in the Gambia, we saw how much we take luxuries such as food, technology and even beds for granted. Though we would all love to change or perhaps improve the lives of some of the families we had met, we’re not sure they would want to as they might always want to keep there sense of community and how can we be sure that a change of lifestyles would not destroy that precious and priceless sense of COMMUNITY.