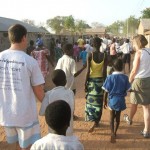 Amazing, truly amazing. I was fortunate enough to be a member of the eight lads going out to Gambia from The Craven Arms cricket Project along with Rich Morley and PC Paul Sparrow. The Craven Arms Cricket Project was helped tremendously by the Fresh Start Foundation, they helped to arrange accommodation, transport with a driver and most importantly linking us with Kwinella School in rural Gambia.

So many things were learnt on this amazing trip and the experience really will stay with those involved for a lifetime. The most apparent difference between our culture and the culture of rural Gambia had to be the vast amount of poverty. When we arrived in Kwinella we were welcomed by this incredibly enthusiastic and friendly crowd of around two or three hundred people. At this stage everyone was speechless. We were then taken to the School where we watched some traditional dance after being given an orange and a can of pop.

Following this welcome I saw one of the saddest things I have ever seen. As we got up to leave for Tendaba Camp all the little children rushed in to the dishes where we had merely put the white peel off the oranges and literally began fighting between each other over it. As well as this in our time in Gambia it would have to be said that roughly 80% of questions were ‘can I have that bottle?’ this was because they only has empty oil containers to get water from local bore holes back to their homes.

We spent four days coaching cricket in Kwinella School before going back to the capital Banjul. The amount of cricketing potential in Kwinella really was astonishing, I believe this had a lot to do with the amount of exercise they do and the lack of game consoles.

Whilst on tour we represented England in Football as well as Cricket. We played one evening in 35°C against the locals from Kwinella somehow how winning 4-3. When we played the National under 15’s in a game of cricket in President’s Square, Banjul we won again thanks to a fine batting display from Luke Miles and Usman Ahmad with both of them hitting 33 with Miles hitting a 6 into a nearby Linen Shop! Here we met some fantastic characters such as Johnny Gomez, Mr Gomez as the President of The Gambian Cricket Board promised to expand and teach cricket right across the Gambia.

This trip could never have happened without the support and fundraising from those around us, this includes parents, local businesses and the local council. We would like to give a massive Thank You to them and in particular Neville Stephens and his wife Hazel who came to wave us off with the parents at 5 O’Clock in the morning. Thanks everyone for your support and for an amazing experience from the whole team!!! As we speak we’re editing a film so we can show a film to the people of Craven Arms, we hope you’ll find it of great interest.