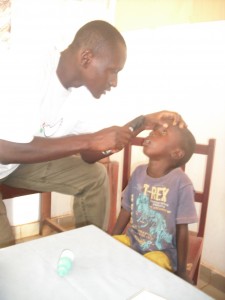 FSF begun a community eye screening project in May this year after receiving a report that many people within rural Gambia were losing their sight due to mature cataracts and other eye conditions and infections. Without access to a clinic many people were going blind with conditions that could be treated and blindness prevented. Consequently, this prompted FSF to hold eye screening clinics on an ongoing basis. FSF have an overall target of screening 14,100 people covering 36 rural villages providing medication, glasses, after care, funding operations and delivering eye education workshops for as long as funding is available. FSF’s aim is to ensure that people have their vision and can go about their daily lives with ease being able to attend school, work and contribute to their community’s development with the support from FSF.

The first clinic was held at Kwinella and the queue for eye screening was in excess of 150 people!

A total of 125 patients were assessed.

CONDITIONS SEEN
The conditions seen varied in extremity for example cataracts and an uncorrected refractive error can lead to low vision and total blindness if not treated, whereas pinpueculum is a yellow/white deposit on between the cornea caused by dust, sun and dry environments and can be treated with steroid eye drops.

MEDICATIONS
After the diagnosis patients received appropriate medication and/or glasses in order to cure or remedy their eye conditions. Seventeen people were referred for surgery. FSF endeavors to provide follow-up appointments with the eye specialist.
Below are the statistics:
• 65% received medications,
• 30% received glasses,
• 5% were referred for surgery (minor and major). 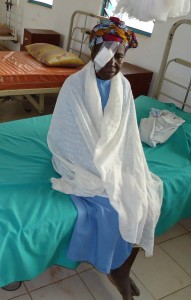 The outcome of these operations is crucially important, not only for the patient, some of whom had very poor sight, perceiving only movement without detail, but also to demonstrate to the wider community what could be achieved, with the patients becoming ambassadors, promoting the work in eye care medicine and surgery, without resorting to ‘traditional medicines’ and so causing severe damage / blindness as a result.
1 & 2 where reviewed at their homes on 16th July following release from hospital on 27th June. Both their results were most satisfactory.
3, 4, & 8 were reviewed on 17th July in their village 15 minutes motorbike ride from Kwinella. All had a satisfactory conclusion, with 8 having recovered well from anterior capsule calcification.
The day following the operations, plasters are removed and the prognosis of the surgery investigated. Eye drops are given to patients, being a mix of antibiotic to counter infection and steroids to reduce inflammation.
Unfortunately 5 and 6 happened to be the last patients. The guaranteed generator electrical supply between 9am and 4pm failed at 2pm in the middle of the operation. The Surgeon requested the hospital back up generator to be activated, but this malfunctioned and failed to start. The Surgeon had to continue with the eye surgery using a hand held torch, causing him a huge amount of stress. When the plaster was removed the following day there was a haze plume over the cornea, which is now improving satisfactorily.
7 had come to the eye clinic with a severe condition and was bilaterally blind. On removal of the plaster on 13 July the replacement corneas provided him with so much joy and excitement, he was dancing around the hospital.
The operations were successful with all patients now having sight, a life changing result that FSF are proud to have facilitated.