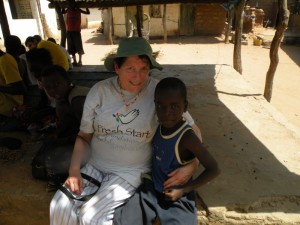 After two weeks in The Gambia, as a volunteer teacher for FSFGambia, working in Kwinella Lower Basic school, I can truly say that these two weeks were two of the happiest weeks of my life. Why? Firstly, because the Gambian people , adults and children alike, were themselves a generous, smiling people, who gave back in kind or in kindness, far more than anything I could offer them. The school children listened, laughed and tried hard to understand everything that I was saying to them; the adults did everything they could to make my life as comfortable as possible. When  I fell over in a pothole for example, they were eager to show me the following day that that particular hole no longer existed!!

Secondly, because there was such a huge need, and I was able to a very small degree, address some of that need. I have skills which they needed and welcomed from me.

Thirdly, because, despite the rubbish around the place, the potholes, the dust, The Gambia is a beautiful country, so different from any I have ever known.

And fourthly, because the sun shone every day – and I had left England in February!

One thing was really clear, the work done by FSFGambia is vital. For example, the headmaster had been informed that rice for the school dinners had run out and there would be no more this term. The first day at school after this news saw only a third of the pupils in school (which is not compulsory). But FSF had stepped in and provided the missing rice. Those children were fed. And the next day the school was full again, and remained so. Providing guaranteed school meals for these impoverished children may ultimately make a vital difference to the future of The Gambia, by ensuring that they have access to education.  An educated people is essential for the future, to help The Gambia continue to improve its opportunities at home and abroad.