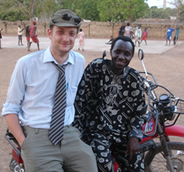 Hi, my name is Greg Packer and I’m a 23-year old final year medical student at the University of Birmingham.

In April I spent six weeks in The Gambia, most of it at a rural nurse-led health clinic in the village of Kwinella just south of the River Gambia. In UK medical degrees a period of the course is kept free in which we are encouraged to go abroad and work in a different healthcare system to get experience outside of the NHS. I chose The Gambia as I knew it was going to be very different from what I was used to; from what I had read it seemed like a really interesting, friendly place; and because I thought I might be able to make myself useful as the healthcare system is under-resourced.

Lamin and Rebecca at FSF were extraordinarily helpful in organising the trip. Lamin is originally from Kwinella and went out of his way to put me in touch with the staff. Lamin’s father lives in Kwinella and was kindness and generosity personified. He provided a delicious meal for me each day as well as introducing me to many different very welcoming people in the village and generally looking after me.

At the clinic I frequently accompanied staff on visits to outlying villages to vaccinate babies and young children. Everyone I spoke to was unfailingly friendly and it was fascinating to visit the different communities, and thrilling to be bouncing down the dusty unpaved roads in the back of the 4×4 ambulance in the oven-like heat of the dry season.

Most days I helped Jammeh, the head nurse, in the morning outpatients clinic. At first I found it very difficult to communicate but after a while I learnt a few words of the Mandinka language and, with the help of another nurse translating, was able to run a clinic myself under Jammeh’s supervision.

The clinic was well-supplied with some drugs and treatments, for example anti-malaria drugs, and the staff were committed, enthusiastic and those who had been to the nursing school in the capital were obviously well-trained.

Unfortunately there were quite a few problems as well: it was impossible to get tests that would be routine in the UK, such as X-rays or blood tests. Pain relief was limited, for example paracetomol is not really good enough for a man who has accidentally slashed his foot deeply whilst cutting wood with a machete. Worst of all referral to a distant hospital for treatment of more seriously ill patients was just not an option for some poorer people and others had to suffer with severe illness until the hospital had room to accept them. Seeing the plight of some patients really made me realise how lucky we are in the UK to have a free (at the point of use) health system available for all.

I like to think that I made a bit of a difference whilst I was at the clinic. Having two people running the clinics instead of one made things much faster and enabled us to see more patients. My training and the nurses’ training are obviously very different and we were each able to learn from each other. When I left I gave the clinic some really useful textbooks that are favourites of every UK junior doctor and a drug formulary that will help them use the unfamiliar medications they sometimes receive from UK donors.

One way I think I may have helped some people was by offering a slightly different perspective to patients. Splitting the clinics enabled me to spend more time with patients than they were usually able to have with Jammeh and in some cases I was able to offer little bits of advice that seemed to make a difference. One lady had been in discomfort for a long time because of swelling around one knee from continually kneeling down to do housework. Because I had the luxury of time to talk to her I was able to give her simple advice like using a cold compress and elevating her leg at night as well as the paracetomol she had been taking regularly. A couple of days later the lady came running up in the street and was excitedly telling me that her leg was much better than it had been for a long time.

A more unfortunate case was that of a lady with heart failure who was going pretty much untreated despite there being appropriate drugs available in a batch of tablets sent by a UK donor. The nurses were not familiar with the names of these drugs and had not realised they would be useful. After we realised this Jammeh and I went through all the boxes of drugs and identified them, using my formulary, so hopefully they will be able to make full use of what they have available in future.

I could go on all day about the incredible time I had living near Kwinella. Highlights included going to Serrekunda for a big family celebration in honour of the naming ceremony of a newborn; attending the village get-together, almost like a fete, on May Day; and being invited to share dinners, like one of the family, in almost every house I visited in the village, sometimes even if I was just spotted walking past.

The most generous and friendly people I met were of course Fallijeh Daffeh (Lamin’s Dad) and his family but the moment that summed up my Gambian experience for me was when I was watching a football match between the school students and a group of adults and found myself feeling really dizzy and dehydrated in the heat. I asked Alieu, the clinic’s ambulance driver, if there was anywhere nearby I could buy a drink but he shook his head. I carried on watching the game and was then surprised when a motorbike pulled up and the rider gave me a chilled 1.5 litre bottle of mineral water. It turned out he was the owner of a shop in the village and had overheard me asking for water so had driven off, got a fresh bottle and brought it back. He absolutely refused to let me pay and then wandered off back into the crowd.

The Gambia is a wonderful, friendly place, particularly out in the rural areas, and, even though they are under-funded and resourced, the health workers are making brave efforts to treat and help the local people. I would absolutely recommend that anyone who has the opportunity of working with the FSF, be it in a health centre like me or perhaps in a school, should seize it as they can be sure they will be well-looked after and have a thrilling, fascinating, rewarding time.