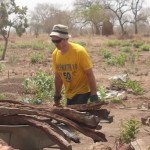 I went to The Gambia with The Fresh Start Foundation in March 2012 with a 20 strong group comprising mainly of Lush employees from around the world. The Fresh Start Foundation is a charity that Lush has been involved with supporting for the last few years and I have done some fundraising for. This farming community of around four thousand people is based in the village of Kwinella in Central Gambia around five kilometres from the Gambia River.  In the Gambia where it only rains for a couple of months per year farming is a hard life and there is very little other form of income generation as it is three hours’ drive from tourist beaches. This means that standard of living is poor throughout the majority of the region.

While all this is true my experiences while we were there it was anything but depressing. I found the community to be strong and thriving, the children to be full of life and joy, the adults welcoming and happy. It was also clear that a significant proportion of the village have been positively affected by the work that the charity has undertaken.

I would like to share one of my days to emphasise this feeling, we were invited to spend a day helping at an eye clinic run by FSF.

Sutay, one of FSF key figures, is a skilled eye specialist who grew up in Kwinella, now aged 35 he lives and works in the capital Banjul. He regularly makes the three hour trip, mainly on dirt roads, into different communities in the central region of The Gambia on a motor bike to run eye clinics funded by FSF. These will often be the only access people will have to eye care and as such when word gets around that and eye clinic is being run often in the region of two hundred people will turn up. Some people will travel up to twenty miles and more to attend, often without access to motorised transport. The people who attend range from very young children to the elderly and come for many different reasons. A significant proportion of the people who attend have the sort of conditions and ailments that you would expect in aging people including failing eyesight and cataracts. To this end everyone who comes to the clinic no matter what their complaints are given a basic vision test similar to the letter charts that you will know from your local optician. There is one major difference needed for a population where a significant proportion are illiterate, instead of letters they use a symbol similar to a E but facing randomly up, down left or right. The person being tested is the asked to indicate which direction the symbol is pointing. This meant that although we had a language barrier we could assist in the vision testing. Glasses are prescribed and supplied by the charity as needed and where funds allow mature cataracts are operated on.

There are other conditions that have more to do with the environment where these people live and work. It is hot, dry and dusty for significant proportions of the year so people get damage to the front of the eye which can lead to scaring and impeded vision. Other people, often children get their eyes scratched with sticks while playing or walking through the bush, this can lead to significant vision impairment especially when not treated appropriately.

Common complaints that we are all aware of in the western world are also in evidence in Kwinella. While we were there a number of children were waiting for treatment for conjunctivitis. As in nurseries and schools around the world when conjunctivitis gets in it is passed quickly amongst children. It is passed around even more readily when fresh water is in short supply. In some villages in the region where their water source is an open well it can become contaminated and the infection can be passed around to anyone that uses the well and quickly a complete village can become infected. Luckily now Kwinella gets its water from a borehole provided by Fresh Start this and stomach complaints have noticeably reduced.

We met one lad who was in his late teens who had previously suffered from conjunctivitis and had sought advice at the medical centre. At that time there was no-one with any experience of eye care at the clinic so he was advised to use traditional treatments. Unfortunately these were not appropriate and he is now permanently blind in one eye and has significantly reduced visibility in the other. This could have been treated easily with modern medicine but the damage is now irreversible and he suffers constant irritation and pain. He has twice been taken to consultants in the capital where he stayed with Sutay as his family could not afford any other accommodation. In this case there was nothing that could be done so now they are treating him to help him manage his discomfort.

There was a lad of around seven who had brought his younger sister for treatment of her conjunctivitis. They were waiting when arrived for the clinic at around nine. She was tested, her details taken along with a picture to help with identification in the future and given eye drops that would quickly treat her condition. They then left to walk the 5km back to their village in the near forty degree heat. It may be unusual in the UK for two young children to make this kind of journey alone but well worth it to avoid childhood blindness.

The most distressing thing I saw in the time I was in The Gambia was a boy in the clinic with bloodshot watering eyes. He was clearly in significant pain but was not complaining. During his examination his eyelid was lifted and his eyeball was completely red, all the blood vessels swollen and rupturing. He sat quietly and calmly as he was examined repeatedly to ensure that the scale of the damage was accurately assessed and the cause correctly diagnosed. He was also diagnosed to be suffering from conjunctivitis, although a much more advanced case. He was given a triple pronged treatment due to the seriousness of his case, eye drops to reduce the discomfort, a second antibiotic eye drops to treat infection in the eye and finally antibiotic tablets to treat the cause. Unusually because of the extent of his condition he was asked to return backing into the clinic four days later on the Thursday to check that the treatment was working.

On the Thursday Sutay came back out to attend the follow up consultation which happened just as we were leaving the village for the last time on our last day. His eyes were almost completely cleared up; he was much happier in himself and no longer showing any signs of discomfort. He was then asked his age and how he was getting on with school. He answered that he thought he was ten but he had never been to school as his eyes had always been too bad to cope with school. The charity then took him and enrolled him in the school.

So for the effort of attending a free eye clinic this child has had a long term eye condition treated, the start of an education, free school meals, a uniform and a much improved start in life. All supported by the Fresh Start Foundation.